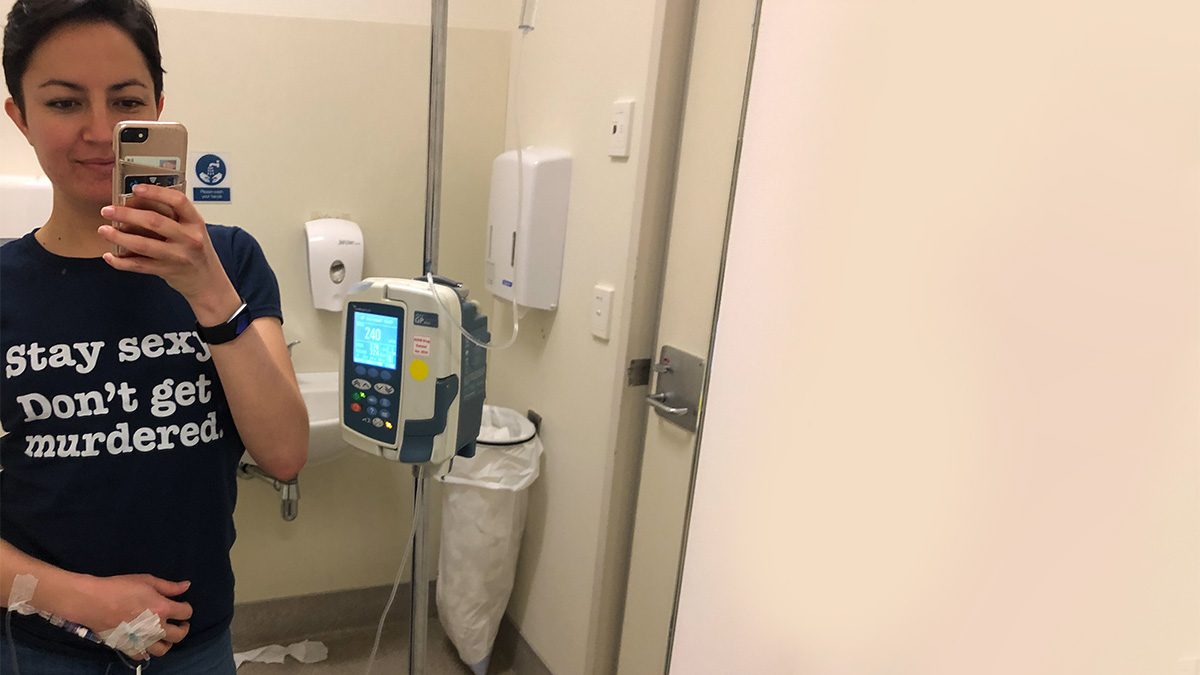 There is so much to unpack when it comes to talking about chronic illness and sexuality – mostly because we don’t talk about it.

As a person with invisible illnesses, I would say that I don’t have it as hard as people with visible physical or intellectual disabilities as there is a tendency to totally infantilise or even fetishise them. So this isn’t about that – I can fake being well to the point that I’m not treated “differently” purely because of how I’m perceived.

In saying that, being sicker than most my whole life, and now with several chronic illnesses, I think I can confidently say that the medicalisation of my body has taken some of my sexuality. But I want it back!

When I was a kid, I had recurrent UTIs.

This is something that no one would wish on their enemy. It’s deeply uncomfortable and painful in your bladder/pelvic area and it burns when you pee.

This was essentially my introduction to my private parts – pain and doctors. I had to have my parents and doctors looking at my privates every time I got another infection. I remember blood and pain, crying in the car as my mum sped to the doctors 30 mins away. Ruined holidays going to hospitals out of hours.

I ended up getting all of these tests to figure out what was causing it (which was a little inconclusive except for a deformed kidney). I don’t remember much of these tests but I remember discomfort and nausea from the gas they use to knock you out.

When I became a teenager, I still got UTIs but now doctors assumed I was sexually active as that’s often where adults get UTIs (always pee after sex, friends). They were asking me sexual questions and asking how I wipe when I go to the toilet as if I was a stupid teenager who was doing it to themselves.

In reality, I was so far from that, and I knew how to wipe myself so it was just intrusive questioning for a kid who needed antibiotics.

When I did get to the time of my life that sex was something I was interested in, little did I know that I had already attached very negative connotations to my bits.

I couldn’t use tampons. I was in an all-girls hostel, so I had all of the support in the world. We discussed how to use them – when I said they didn’t work for me, I had a girl sit in the stall next to me and talk me through the steps. But I just COULDN’T do it.

It got to the point that we decided that I needed to be very drunk to be able to physically relax enough to be able to actually do it. And that’s what we did. There was a lot of Lindaeur bubbles involved and boom, it worked. Painfully, and not super romantically like in the movies. I was vomiting all the next day, hungover, but I was just happy to have been physically able to do the damn thing!

After that I slowly learned how to relax my body to the point that it was possible and it’s been pretty manageable ever since. I even learnt how to use tampons!

Recently I heard a podcast where someone was talking about their experience with Vaginismus and my mind exploded – that was me!

According to Medical News Today, “Vaginismus is a condition involving a muscle spasm in the pelvic floor muscles. It can make it painful, difficult, or impossible to have sexual intercourse, to undergo a gynecological exam, and to insert a tampon.

When you try to insert an object such as a tampon, penis or speculum into the vagina, it tightens up because of an involuntary contraction of the pelvic floor muscles.“

In a way my situation was a bit of a trauma response. It’s like, all of my experience in this area was negative. No one had historically looked at my vulva because it was so great down there. No, it was because I was peeing blades of blood and felt like I had a sea urchin in may bladder.

Any historical penetration was medical and had been negative and uncomfortable. Honestly, it had felt violating, even if it was for legitimate medical reasons – I was a child and I didn’t want this.

I have a memory as an adult I had to have a test that involved popping a quick swab in the urethra and I IMMEDIATELY started crying and panicking. I told them, “Nope, I don’t want that. Don’t need that. Nope. Nope. Nope.”

I had to have a nice nurse hold my hand and talk to me while I got it and, honestly, it was fine. But that panic attack is a legit trauma response from what I went through as a kid.

No one seems to talk about the negative effects of this sort of medicalisation of your body.

How does a teenager learn about the joys of sexuality when they’ve been taught nothing but how abnormal and painful their vagina is? How does a teenager/adult feel comfortable with their private parts when everyone is telling them that painful sex is normal and that not using tampons is just a weak excuse?

My first Pap smear was traumatising for similar reasons. I had a rude male doctor who was prodding at me with a speculum getting angry at me for not relaxing. I wasn’t able to relax, understandably because I had an angry man I didn’t like trying to penetrate me, a teenager who was already traumatised in this area.

I ended up bawling and apologising while he walked off in a huff because I wasn’t doing it right. (Note: I think this is when I probably could have been diagnosed with vaginismus but whatever…).

Getting older and sicker hasn’t been much better for my sexuality if I’m honest.

The more sick you get, the more needs you have. If you’re in a relationship, you don’t just want a lustful partner, you also need someone nurturing and supportive.

Your relationships can get off-balance because sometimes you need more than you can give when it comes to support. You need you someone who can drive you to the hospital in the middle of the night and bring you clothes and talk to the medical staff. Who will cook you dinner and clean up afterwards when you are incapable of doing anything.

Who will let you cry for no obvious reason and try help, when there may be no way of helping. Who will let you talk about all of your wildly unsexy health issues because you need an outlet.

And then you want them to still see you as the sexy person they once met in a bar? When you had your cutest Tinder pics up and saved the medical chat for date four. Like, how?!

I know it’s technically possible, because there are many amazing relationships out there between people with all sorts of health issues and their partners who are both their carers and their lovers.

But I’m not sure who is out there teaching people that sick people can be sexy, or telling sick people that they deserve sex, no matter how gross their health issues can be perceived.

No matter how much you want to help and be there to fix a sick person, it’s really important to remember that infantilising them because they seem vulnerable is, well, infantilising.

Even when the person is a child, it’s important to treat them as a human who will learn from their experiences and they will inform their lives as teenagers and adults.

This isn’t a dig at my parents – they were young and always had my best interests at heart. This also isn’t a dig at anyone who has tried to date me while I’ve been sick – I’ve been the one sitting there telling them not to date me. Literally asking why on earth they’re there.

I didn’t choose this, but it’s happening to me involuntarily. I think that anyone who is choosing to be with me while I go through it is a sucker for punishment. If it’s optional for you, I say “RUN!”.

It’s not a dig at myself either – there is only so much I could do as a child/teenager/young adult without any real understanding of my body, my rights or especially my sexuality and what was right or wrong.

But I’m a grown ass woman now with the entire internet in my pocket and a therapist I’ve been seeing weekly for years. There’s only so much I can point to outward experiences before I realise that maybe it’s partially my fault.

I have to teach myself that sick people are humans first.

If I see myself with my internalised ableist eyes as a sick girl who is underserving of love, sex AND nurturing care because she is too difficult and not worth the energy, well of course that’s how others will see me.

Have I desexualised myself because of the childhood negative connotations? Because I don’t want to be harassed by men? Because of my chronic health issues? Has the media made me feel like a sexual vessel for men and not for myself? Have they made me think I need to be able-bodied to be able to access my full range of needs?

Do sexy people have to go to the hospital every month to be able to live? Do sexual people have bowel issues? Is it sexy to have to use a nebuliser and manually clear your lungs every day so you don’t get lung infections?

I’m not sure how people separate their illness from themselves. I’ve always been the sick girl – since I was a kid. I’m the one you hear before you see because of my cough. My entire daily and monthly routine works around appointments and medication. I have a bloody chronic illness blog.

I’m the one talking about her health issues all the time to try educate and get understanding from the people around me. I want to empathise with you and your UTIs or your gut issues because I understand what you’re going through.

If you are a chronically ill person who has learnt how to do this as an adult, please teach me your ways! I have literally just realised all of this.

How do you separate yourself from your illness(es)? How do you teach yourself that you’re deserving of love, sex and nurturing care? And how do you ensure people treat you as you want them to?

How do you overcome the medical trauma and unhealthy understanding of consent and boundaries? How do you reconceptualise your relationship with your body?

So many questions that I’m trying to answer for myself. Girl needs an awakening!