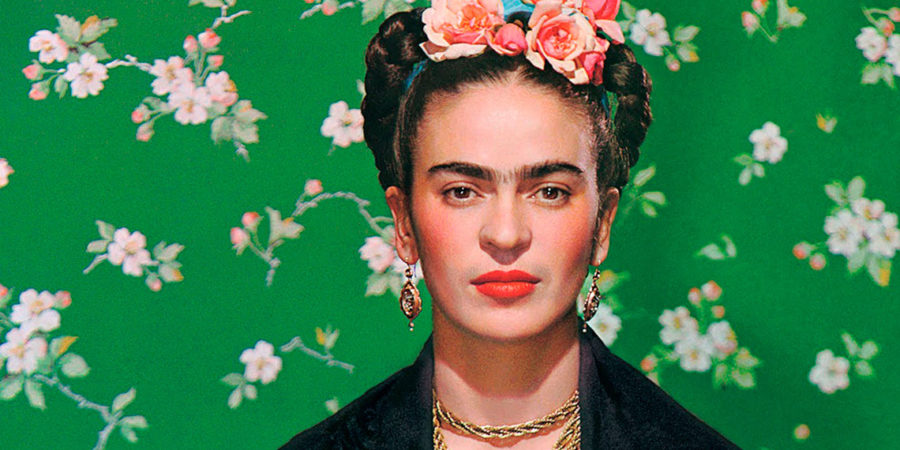 She has such a recognisable face that seems to be plastered everywhere – all through Mexican restaurants, painted on the sides of buildings, in tattoos, on t-shirts, as costumes on Halloween. She’s just everywhere!

But who is Frida, and why is she so fashionable right now? And why am I writing about her on a chronic illness blog?! Well, I’ll tell you.

I first learned about Frida Kahlo at uni when I was studying design. The main thing I remember about her was that she was this amazing feminist artist who rejected the portrait painting style of her era which was an unrealistic portrayal of women.

She wanted to paint self-portraits that actually looked like her. Monobrow and all. If anything she embraced these aspects of herself and enhanced them in her art.

This was pretty big for me when I learned this at age 18 – I had been teased at primary school for my moustache and monobrow. I didn’t know that these things could be embraced!

And so my love for her began. I mean, I still tweeze that stuff off, but I appreciate her work towards it 😉

Over the years I started to hear more and more about this Mexican woman and really began to relate to her and look up to her as an incredible human as well as artist.

I now own two different tops with portraits of her on them, a headband, and some earrings I got from her hometown in Mexico City. I wear these as a sort of power source when I need an extra boost.

This might not make sense and I’m not sure everyone knows the full story of Kahlo’s life. It’s definitely not as perfect as you might believe if you never looked into it, so let’s start from the start.

An overview of Frida Kahlo’s life in bullet points:

Frida Kahlo was a passionate, disabled, bisexual, communist, activist, artist and all round strong, outspoken and talented woman and I may or may not be in love with her.

To me, Frida is a symbol of strength in the face of adversity. A symbol that you can be strong and passionate and intelligent while also being in physical and emotional pain.

A symbol that disability doesn’t need to stop us, it can push us, make us think outside the box. It can influence us and make us better people/artists/creators for it.

When I went to Mexico, my very first stop was La Casa Azul – I needed to see the home of my idol in person.

My favourite images of Frida are of her painting her own corset/back brace – making something that would feel like a curse into something beautiful. At her house, I felt a similar feeling seeing her wheelchair in front of an easel. Showing how she set up her house to work for her disability, rather than lose the ability to paint at all.

Her art shows her happiness, her pain, her feelings and her beliefs in the most beautiful, symbolic ways. She created pieces we can admire and learn from for decades after her death.

Plus, she was confident, charismatic and beautiful in a way that I just can’t even.

It might sound cheesy or spiritual, which is something I don’t generally consider myself, but I wear clothing, accessories or jewellery with her portraits on them to make me feel stronger.

If I’m going to the hospital for my treatment, if I have a scary appointment, if I’m going to work when I’m not feeling great, or if I’m going to an event that I don’t have the energy for, you may see me wearing her face somewhere on my person. Or it could be hidden under my jumper – you may not see it, but I know it’s there.

That I too can add value to the world, not despite my problems, but strengthened by my problems.

Frida is an icon for all

If you’re chronically ill, or LGBTQ+, or outspoken in a quiet world, or painfully passionate, or in chronic pain, or have faced any sort of adversity, I recommend you read more about Frida if you haven’t already. She might become an icon for you too.

Not just because she paints beautifully, but because she is a wildly interesting woman who has seen some things.

She is a relatable queen for all who refuse to maintain the status quo.

And there we go. One thing I didn’t know after uni is that 10 years later I would end up writing a personal, voluntary essay about Frida Kahlo, but here we are!

This is actually only a small intro to Frida – I didn’t even talk about her art much, or her clothing choices and her relationship with traditional Mexican culture.

There is much to know about her. She is so much more than a trend and a woman with intense brows.

I hope you now love Frida as much as I do, and will eat at your Mexican restaurants surrounded by her portraits knowing why she’s so freaking cool and amazing.

And remember, I’m always down for a solid Frida chat.