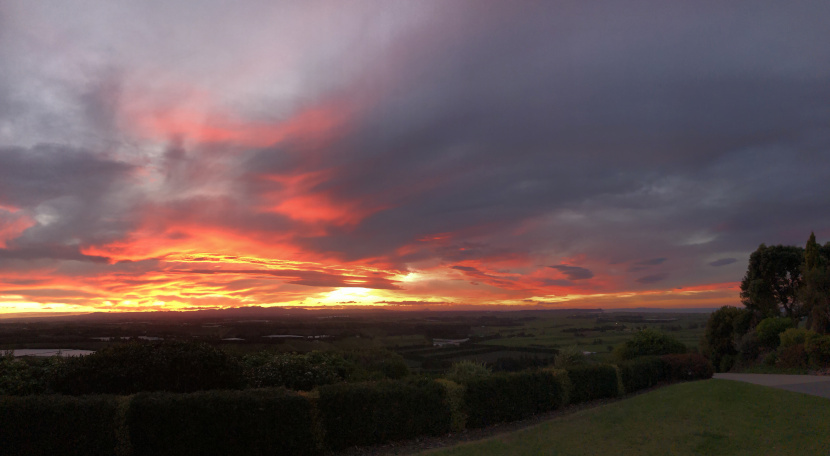 I had a moment tonight.

It started with a random Instagram tarot reading for Sagittarius folks (don’t judge me) that was alllll too accurate. It was so much so that it reminded me that my problems aren’t individual, they’re so broad that I feel the exact same way as a hundred other people in his comment section.

He reminded me about the path I’m on. That it’s a path and I’m not just sitting in a hole alone somewhere. There is actually a next step.

I swear the hardest part of your brain being in survival mode for so long is that when your prefrontal lobe switches off, it’s like the future doesn’t exist anymore. It’s all about the present and making it to the next minute.

The future doesn’t exist, but it feels like “something” is chasing you. To where though?! Nowhere… That’s why it’s so terrifying. You’re trapped.

Then tonight the sun set outside the house. The brightest, reddest, fieriest sunset I think I’ve ever seen.

The sort of sunset that looks like the world is on fire. A big old black and red, smokey fire. But it’s not, it’s actually the most majestic, artistic thing you’ve ever seen.

My head has been fuzzy and in the clouds for so long. And I thought this sky was the same, but I looked and the sunset was sharp. I could see the details on the clouds, on the skyline, so far in the distance.

It was like realising that you thought the world was a a garbage fire, but when you’re ready to see it, it’s actually a full masterpiece.

The horror was definitely there before, but it’s like someone snuck in and replaced it with the opposite when you were looking the other way.

And I know this is cheesy as fuck, but sunsets and a stout will do that to ya.

Basically what I realised is that I’ve already hit the rock bottom of this period of time.

She’s on her way back up baybeeee!

I thought back over my life, and I feel like I’ve hit a form of rock bottom about 4 times before.

In Blackpool, after my abusive relationship, just before my immune deficiency diagnosis, and during my gut issues.

But the difference between this rock bottom and the past four is that I am no longer forcing a smile through it all.

I’ve been hurting this time. I’ve not been pretending I’m OK. I’ve been crying, and angry, and asking for help. I’ve quit my job. I’ve submitted to the truth of my feelings, not pretended they’re not there to make everyone else comfortable.

And you might think, we’ve seen you sad before, Charlie – I guarantee you’ve never seen the truth. No one has, not even me. You might think that this time I have been repressing… and I have, but so much less and I realised and stopped this time, hence my messy current existence 😁

My fake smile is not my identity anymore.

I’ve pretended too many times. It’s never worked for me. It only works to make others comfortable, not me.

In the span of my life, I’ve taken on so much of the shit that other people have done to me. I’ve blamed myself, or I’ve excused them for all variety of reasons.

Do you know what that does to an individual. It’s like I’m an opt-in punching bag. I take the punches like it’s my job.

The damaged guys get to take their insecurities, their trauma, the shit that they refuse to look in the mirror and acknowledge, and they put it on me, cos they know I can take it. And I can.

It’s like at primary school when I let the boys practice tackling on me. Literally I did that.

But this shit is. Not. My. Job. And I have no fucking idea why I’ve been doing it for free.

If people don’t understand what it feels like to have your whole life and identity feel like it’s been stripped away from you when you realise that this stuff you’ve been doing isn’t you, let me tell you.

I can’t work anymore, I can’t afford to socialise, I can’t mentally or emotionally even handle slightly difficult situations. And this is so much not me that I can’t describe it.

I feel useless. Like I have no value in the world. Helpless and pointless. Like I’ve lost a version of myself and I can’t get it back… but I don’t want it back…

The pain and loss of identity that I’ve experienced in the past 8 months has been so extreme, that I’ve genuinely fantasised about becoming a drug addict living on the street. Kind of a lot.

And I can hardly explain that to myself, but sometimes I’m jealous of the people who appear to have nothing, who don’t seem give a fuck, because that’s exactly how I feel, except I’m a fraud with an apartment, fancy professional friends, and a credit card.

It feels like when your identity is gone, you may as well throw away what’s left and fuck it all off.

I quite honestly feel like I would much rather live in temporary clouds of euphoria and drunkenness, in a state of zero fucks at all, with no external expectations or mortgages, and if I’m lucky, I’d die alone on the street in the cold. Anything other than the awful state of pretending I’m ok while I experience intense emotional agony, feeling like a total mental fuckhead, as everyone looks the other way with their jobs and money and identities.

And I don’t think people realise I feel this way. That I’ve been existing a very, very, tiny, small step from dramatically burning my life to the ground.

From killing myself. Not by suicide, but through hedonism. A beautiful storm. A flash bomb. Cos what the fuck does it matter anyway?

Seriously? What does it matter?

Life is a construct that we create meaning for so we feel important. And I don’t feel important, so what’s my meaning? Everyone is faking it till they make it anyway.

I haven’t had meaning for so long that it has taken so much energy for me to NOT do something drastic. Cos it feels like I’ve been staring at the fuel and holding the lighter for a while now…

So uh… let me tell you… this sunset was important to me.

It’s reminded me of the possibilities. All that cheesiness I wrote above, honestly was a turning point for me.

Probably why it sounded so cliche. Cliches exist for a reason.

I need a drastic change. But I need to be able to perceive a future for that drastic change to not be hard drugs and temporary things that feel good right here, right now in my survival mode.

And I think maybe I can see that there is a future for the first time in a while?

Like I said, I’m not fake smiling. I’m not pretending. I have in no way been ok for a long time. But I think I’ve hit my rock bottom for this period.

And I’m here, I’m being open. I’m feeling kind of ok. I can see that the future exists.

Maybe my prefrontal cortex is back, cos I’ve bloody missed her! I’ve been so fuzzy and out of it, feeling like I’m walking through mud to get around, dissociating in parks and having anxiety attacks in pubs. I feel like I’ve been lost and tired and running and so scared and like I’m about to cry, constantly. For. So. Fucking. Long.

Don’t get me wrong, today I had full flashbacks about an incident that I thought I had successfully repressed… So that’s back. I am definitely a work in progress and I’m taking this feeling of going upwards with a grain of salt.

I’m still in a PTSD relapse and I can barely pay attention to anything at all without getting caught up in my own awful memories.

But I’m pretty sure I’m still on my way up babes. I’m here. I’m talking. I can see straight. I can see details and potential.

And tarot and sunsets are to thank for it…

As well as like, all that support and shit from you guys I guess 😉

Thanks for coming along my messy journey with me!

Have you enjoyed this blog or learned something new? If you have and feel like supporting me, feel free to click this button to...